RealCaps Company develops and releases dietary supplements, food, and skin care products.
The Company releases only qualitative, high-value natural preparations with a high content of active substances produced at in-house facilities with strict quality control at all production stages – from procurement of raw materials to release of finished products. For this reason, the marketed products not only are the same and often surpassing the imported analogs, but also are more affordable to the consumers.
The Company has production sites in Moscow adjacent areas and subdivision, which produces raw materials and plant-based products near the source in the Rostov Region.
The Company continually conducts research and development of unique products. Company’s brands became very popular due to its high quality, unique recipes, and affordable price. The product line of the company includes over 40 health products of the various form: soft gelatin capsules (seam and seamless), hard gelatin capsules, liquid medicines, oil meal, seeds, hot cereal, toothpaste, and cosmetics. Our purpose is to provide millions of people taking care of their health with effective, natural, and qualitative products at affordable prices.
RealCaps would keep on faithfully following its principles and developing the assortment of marketed products to satisfy the public demand for qualitative and natural products for maintaining their health, promoting the growth of the national economy.

Its inception was promoted by steadily growing public interest in qualitative non-pharmacological preparations, as well as by demand for qualitative services in the field of production dietary supplements.
RealCaps launched its first oils’ product line in the form of seamless soft gelatin capsules.

The Company opened a separate subdivision in the Rostov region, where it processes the agricultural raw materials, thus ensures the production of a full cycle of products.

RealCaps launched the KUSALOCHKA™ product, which has won immense popularity among consumers.

The company and some new investors opened its own cosmetics production site.

RealCaps launched a workshop for the production of soft gelatin capsules (Softgel) enabling them to release more complex preparations in a form convenient for the consumer.
Up to 1 g capsules became available to the consumers.

Organization of own analytic laboratory.

Equipment for the pre-packing

The company launched equipment for the pre-packing of hard gelatin capsules. It ensures a full production cycle (preparation of substance, pre-packing, dust removal, control of ready to use capsules).

The Company has launched the Food Safety Management System (the “FSMS”) since 2014. The first document developed under the FSMS was Food Safety Management Policy published on the corporate website. Many actions for implementation of requirements of the international standard ISO 22000 were carried out in 2015. The Company continuously carried out the actions for the FSMS maintenance and actualization and aimed at the release of safe products. Keeping of required records, as well as adherence of the corporate staff to personal hygiene requirements, sanitary production requirements is only a small portion of the actions in place. RealCaps paid quit great attention to the content of allergic raw materials in our products. Subject to TR CU 021/2011, this category involves fish oil, soy lecithin, and lactose. In-house production laboratory controls fatty acids content of supplied raw materials and released products.

In April 2018, our company had successfully passed the certification audit for compliance with ISO 22000 with the international certification body DQS.

During the audit certification body noted the following strengths:
1. Leadership and commitment of the company's management to ensure the safety and quality of the released products;
2. Wide range of socially significant products for consumer health, of which for children;
3. Competent staff, team-based work, precise allocation of responsibilities and powers;
4. Modern technical equipment;
5. Production support by own raw material components.

The certificate of compliance confirms compliance of Food Safety Management System to ISO 22000:2005. 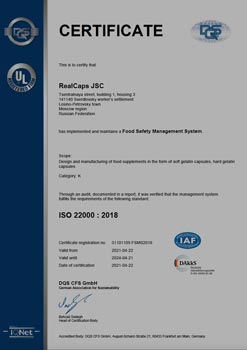 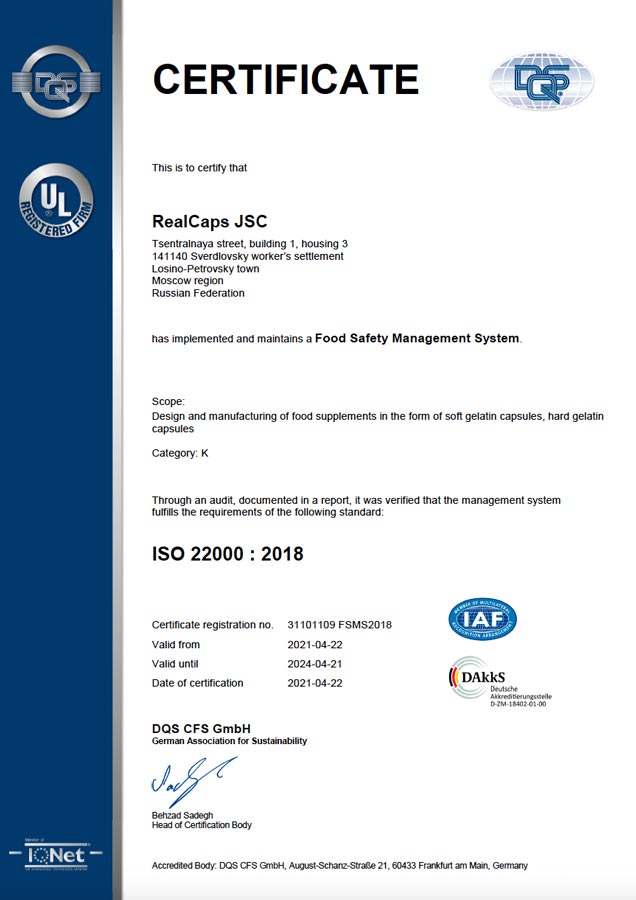 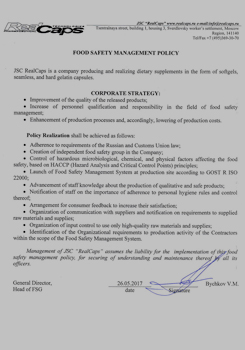 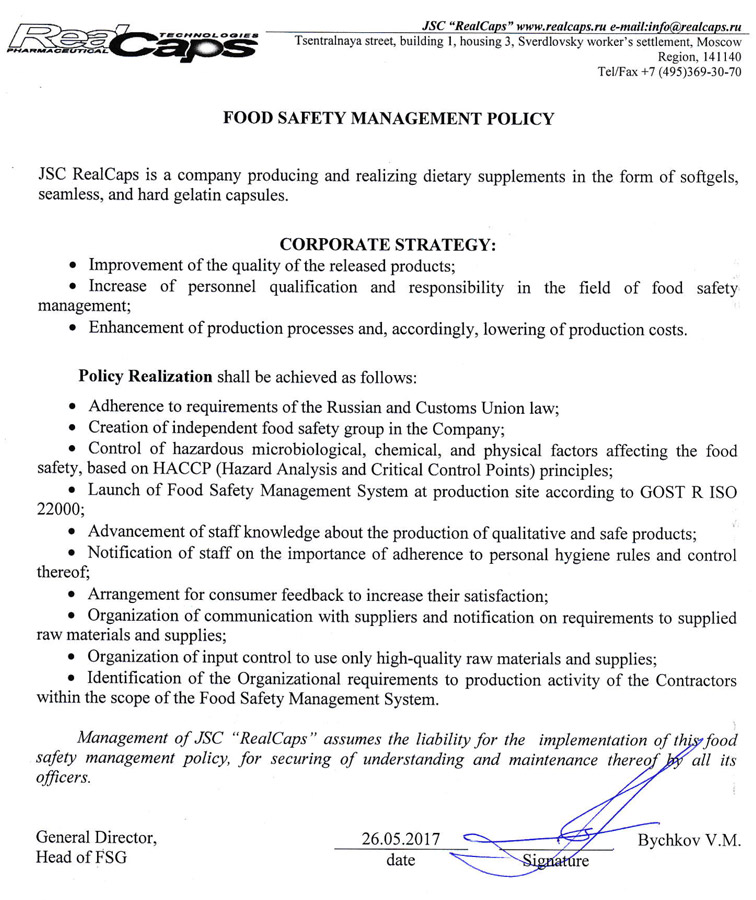